You still have time to place your orders before Christmas. We will be closed from Midday, Wednesday, 23rd December, 2020 and will be open again from 8am on Tuesday, 5th January, 2021.

Enfield Speciality Doors is opening its doors to specifiers, surveyors, contractors, commercial fit-out companies and facilities managers, inviting them for an exclusive tour of its two factories, based within the M25 just outside of London. Visitors will be following in the footsteps of the Ministry of Housing, Communities and Local Government (MHCLG), which asked to visit earlier this year.

The MHCLG turned to Enfield after it was revealed in February that only three of the 12 fire doors tested for the government were able to resist flames and smoke for the 30 minutes required by building regulations for flat front doors. All of the doors that failed were composite fire doors incorporating GRP (Glass Reinforced Plastic).

Shortly after the tragic Grenfell fire, staff numbers in the MHCLG dealing with building regulations went from three employees to 120. Cut-backs had reduced previous staff numbers, and the onus was on the Government to get to grips with investigating the causes of the fire, its rapid spread and how the tragic events that unfolded might have been avoided. But there were few in the Ministry that had the necessary expertise in fire or fire doors. 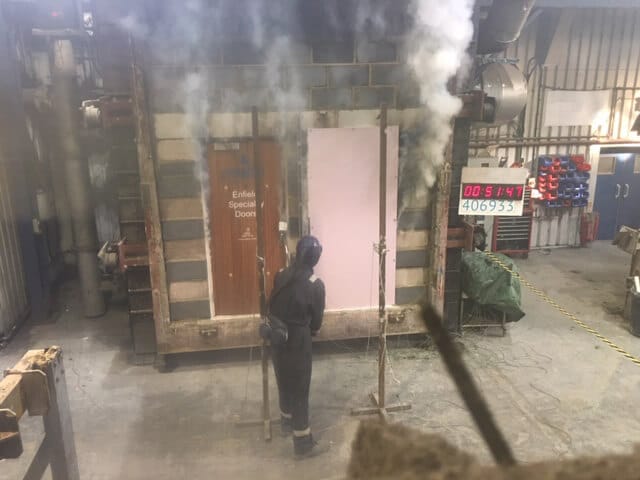 Reacting to Grenfell and the calls for investigation, Enfield’s CEO Nigel Sill took the initiative and invited MHCLG to see the factory, which manufactures bespoke timber fire and acoustic doors. “As far as we know, no other manufacturer was visited,” says Nigel. Enfield Speciality Doors briefed the team from the MHCLG on fire doors, fire protection expertise, how they are designed and made before showing them how fire doors are made. The tour was much appreciated, and the team were able to tap into Enfield’s technical advice following the visit too. The MHCLG then tested 25 timber doors from manufacturers nationwide to assess their effectiveness.

Enfield’s ESD-FD30 PAS24 door was one of the first to be tested, to BS-476:223 in a UKAS accredited test house, with doors opening both away from and into the fire, a particular concern after Grenfell. All of the timber doors passed the 30-minute standard, leading the Expert Panel to conclude: “timber fire doors perform consistently when tested”.

“We added this feature because in reality the doors would be fitted with them for security. Although it’s not a requirement of the test, we believe fire doors should be engineered to protect in the real world,” says Nigel Sill. “It’s Enfield’s policy to ‘over-engineer’ our doors, occupants need time to evacuate a building safely, because things don’t always go to plan, and the fire service need adequate time to get in, fight the fire, and get out again safely. Every minute counts in a fire, so intentionally include a safety margin in all our fire doors.

“Since Grenfell, many specifiers and contactors want to understand more about how fire doors should work and how they are made. That’s why we’re throwing open our doors and inviting them to our fire door factory tours and fire door briefings.”

This website uses cookies to improve your experience while you navigate through the website. Out of these, the cookies that are categorized as necessary are stored on your browser as they are essential for the working of basic functionalities of the website. We also use third-party cookies that help us analyze and understand how you use this website. These cookies will be stored in your browser only with your consent. You also have the option to opt-out of these cookies. But opting out of some of these cookies may affect your browsing experience.
Necessary Always Enabled

Any cookies that may not be particularly necessary for the website to function and is used specifically to collect user personal data via analytics, ads, other embedded contents are termed as non-necessary cookies. It is mandatory to procure user consent prior to running these cookies on your website.